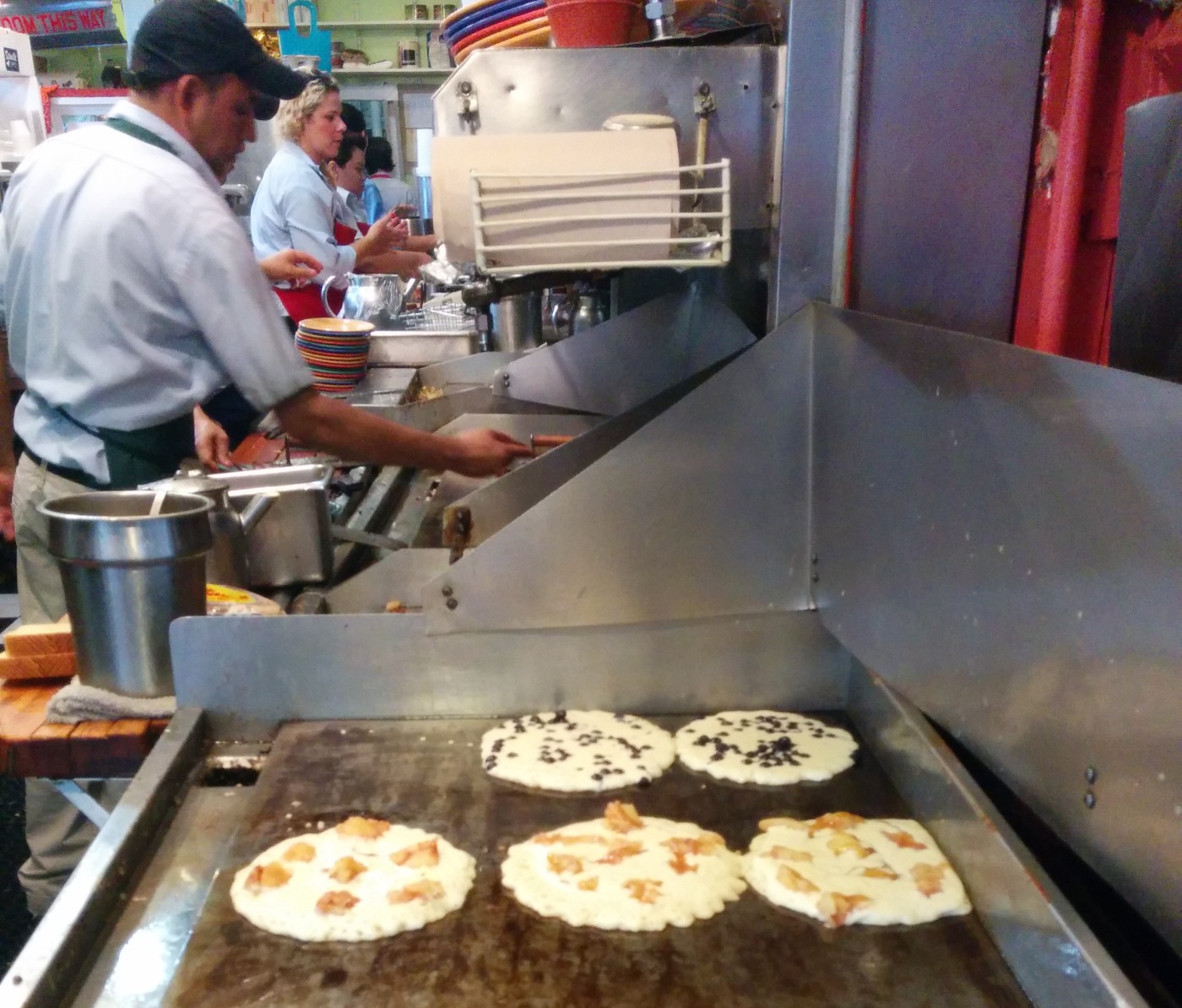 I had a 7 hour layover in Vancouver, so I went downtown to sit outside and write, then ambled to a brewery pub for dinner. It was August, and I ate outside. I had a good meal and a nice beer. The waitress was fairly slow; I sat at my table with a menu, by myself, for a good 10 minutes before ordering. However, it was partly my fault: I didn’t know how to get her attention. Do I try make eye contact across the restaurant and nod? Do I raise my hand and yell “excuse me!”? Do I just wait for her to come around? I went with the safest option: just wait. It worked, slowly.

Then when I got the check I had another crisis: how do Canadians tip? I had been in Canada before, but years ago, and I hadn’t looked it up before traveling—I was only here for 7 hours. So I asked my waitress, “Sorry, how do you tip in Canada, same as the states or differently? I’m on a layover, I just don’t know.” She laughed and told me it was the same, but added that I shouldn’t give her a good tip because she had been slow earlier. I left 20%.

This is just a lengthy introduction to my problem: I was completely unused to the North American way of eating in restaurants. From the portion sizes, to the bottomless beverages, to the relationship with your waiter, things suddenly changed.

In Hong Kong it is perfectly okay to just raise your hand if you want something. This goes for almost any type of restaurant. True, in the really expensive ones the waiter will probably come around on their own accord more frequently, but if you need something in a large room then wave someone down. In many places you can also holler “mgoi!” [pardon!] and one of half a dozen staff members will walk over looking disinterested to raise an eyebrow. Sometimes they’ll even look very confused and go find a staff member who knows a little English for the gweilo [white person/foreigner, lit: ghost face] who can’t speak the language. Further, no one will ask you how your meal is going unless you’re paying more than 200 USD per person, nor will anyone bring you a bill without you asking for it. When you finally get your bill, it’s 1200 HKD [at a low-mid-range restaurant] for four of you. Thus we often had dinner that lasted 2-4 hours, constantly ordering more food and drink, enjoying ourselves immensely the whole time.

Now, however, there is pressure. In the States, you enter a restaurant, are given a table by the hostess and your waiter introduces themselves by name and takes drinks orders to give you a minute with the menu. Then they come back with your coffee/water/soda/wine/milkshake [depending on time of day] and ask for your food order. You tell them all the things you’re going to want, (except for dessert, which you order after you’re full already) and they repeat it back to you. Your (soft) drink glass is never empty, or even half empty, because they’re constantly refilling it, and when it looks like you’re low on hard drinks, they ask the entire table who’d like another round. They bring your food and immediately ask how everything looks, and fewer than 10 minutes later they come by again to ask how it tastes and refill drinks again. As soon as one person is almost done, they start clearing plates with a, “are you all done? It’s okay, take your time!” When the plates are clear, they ask about dessert (“We have a chocolate lava cake, blueberry cheesecake, and a giant ice cream oreo!”) and refill drinks. If you say no to dessert, they bring the check not 2 minutes later, with a “Take your time!” If, at any point, your waiter is not there when you have the desire to order something else, you should wait for them to pass by when their hands are empty so you can say “excuse me!” politely.

By the end of the meal you’ve consumed 500 calories of soda and 1000 calories of food. It lasted 45 minutes (or less). Now, bloated and needing a toilet, you see it’s 53$ for the 4 people at the table, and you have to tip the waiter. So that’s 13.25 plus 20% tip per person, and everyone at the table has 20$ bills or a credit card. This bit takes 5-10 minutes because of math. I have only had a few meals since I’ve been back in the States that lasted longer than an hour, and one of them was Thanksgiving dinner.

American dining culture has resulted in me having the equivalent of 5 cups of coffee in a single hour thanks to bottomless refills, having two cinnamon rolls as a side, never ordering more than what I requested in the first 5 minutes of entering the restaurant, making lots of small talk with waitstaff, and improving my division skills.