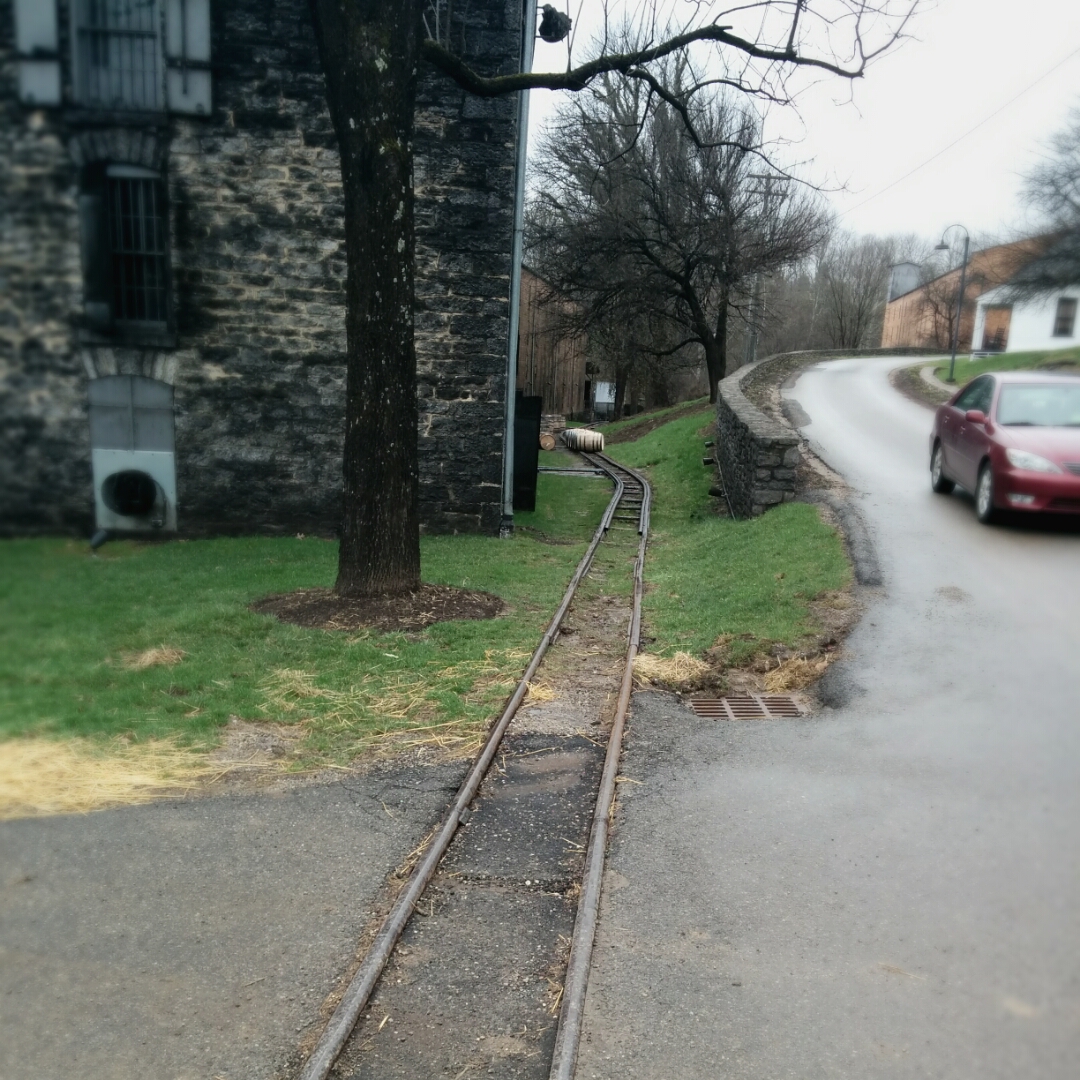 Shocking fact about America: vacations usually are planned more than 2 weeks in advance.

While living in Hong Kong, we would watch our emails for “Cathay Fanfares” in the hopes of snagging a flight to the Philippines, or Siem Reap, or Bali, or Kyoto, or Taipei for the weekend for a mere 100USD. Once a flight is booked on offer, you find a hotel, probably an AirBnB or boutique hotel, whatever isn’t exorbitantly priced and available. Sometimes we’d discuss a trip as much as 2 months in advance, but rarely would we decide anything more than 1 month prior to departure. Sure, I’d book holiday at work ages before a vacation, but that didn’t mean I knew where I was going. Either I’d end up in Vietnam on a boat or camping on a beach in Hong Kong.

In America, we discovered, one must plan further in advance.

I recently got married to a certain Mr Waters, hence the name change (and URL change), and we decided to take a holiday when it was convenient for us. Being a graduate student, that meant over a March Spring Break. We thought it would be nice to go to a national park or something rural and exciting and truly American, so we looked at some information about Yosemite, Glacier, Zion. Everything was booked. Completely. We were even planning more than a month ahead of time!

Slightly devastated, we returned to brainstorming. It was time for a change of plan: road trip.

Chicago is surrounded by suburbs and a Lake then miles and miles of flat monotonous land. There doesn’t seem like there is much point in leaving the city when all you’ll find is corn fields and McMansions. However, there is adventure to be had. We have a couple friends in Memphis,  so we rented a car and drove the 8 hours to see them and enjoy blues and rye whiskey and civil rights and music recording history.

We combined the trip with Nashville, as is legendary, and a lovely stop in Lexington, Kentucky. An hour after we decided this we had a car and lodging booked for the 8 day trip. It appears our impromptu travel style works better for urban environments. We planned to see music, friends and take a stab at the Bourbon Trail.

I drove us out of Chicago’s city traffic after turning in a final paper and 2 hours beyond until we were forced to stop for lunch when were surprised to find ourselves driving through Amish country in Illinois. I knew there were large groups of Amish in Indiana, having stayed there with an Amish family many years ago, and famously the Pennsylvania Dutch, but I was unaware of their presence in our new home state. We saw signs for such, but Mr Waters’ was skeptical. It was “too far from the highway” and “we should really get to Memphis”. However, I was driving, and he needed to get used to doing American Roadtrips: i.e. stopping at random places for no apparent reason. 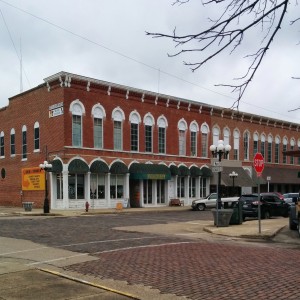 Consequently we pulled off the highway and followed the signs to “The Dutch Kitchen” in Arcola, Illinois. This was the definition of small town America. The roads for a few blocks around the town square were made of brick, but it was still entirely car transit, and real Amish country was still miles away. We nonetheless found ourselves homemade rhubarb jams and Dutch apple butter, delightful southern Illinois accents and a basic dinner meal.

The Brit admitted the benefits of leaving the highway.

Our next stop would be Cairo, Illinois, (pronounced Kay-roe) on the border of Missouri. We wanted to visit for 2 reasons, neither of them having anything to do with the actual existence of Cairo, IL. The first: we met in Cairo, Egypt and thought it’d be funny to go to the American version. The second: Cairo, IL is one of the settings for American Gods by Neil Gaiman. In the book, Cairo is home to two Egyptian morticians in a dilapidated town in decline. Read the book, and it will give you a good idea of what the town appeared to be, for the 5 minutes in which we were there. They do have a very nice Subway restaurant, where you can get a Keurig made coffee and a sandwich, and some stunning ruins of buildings and trains and grain mills, if you’re into that sort of photography.

By then it was about 6 or 7 and we continued on our way to Memphis. Upon arriving Mr Waters’ dear friend welcomed us with Gin and Tonics and a cheese spread, and ushered us to The Cove: a pirate ship themed bar/restaurant with oysters and live music. Though an odd night on a Friday, with some people we presumed were from northern Mississippi and a doppelgänger for Tobias Fünke, it was perfectly enjoyable and delightfully odd. Over a weekend in Memphis we saw live music, ate bbq, went to the Civil Rights Museum, Staxx Records and had a miserable but delicious brunch after getting to sleep at 5:30 am. We also learned some things about Elvis veneration–on the anniversary of his death they have to shut down the streets around Graceland for all the campers.

After Memphis, it is a simple jog up to Nashville, but I kept noticing the beautiful countryside. We followed signs to a random state park for a bit of a walk, then realized it was about 20 miles up the road. At this juncture, we happened upon Loretta Lynn’s expansive ranch. It was good enough for a walk about and purchasing a beer koozie, made specially for glass bottles. The clerk in the shop asked us if it was our first time there. Do people make multiple pilgrimages?

After a quick lunch in the near by crossroads, we drove the remaining hour to Nashville, where we had pints at a local brewpub, and walked down the street to some live venues after trying on ridiculously expensive Stetsons. The next day we rose early and drove down to the Jack Daniels distillery, our first distillery on the trip. It was a gorgeous drive. Jack Daniels was quite fun, we were among the youngest people on our tasting tour, and this was the first time I’d tasted Jack by itself as if it was a nice beverage. I may still go back to Jack and Cokes though. The town itself, Lynchburg Tennessee, is dry. The owners of the distillery successfully petitioned the town government after prohibition to allow whiskey distilling, but no other liquors or beers can be made there for consumption. All of which you can learn on the tour, for which they encouraged us to return again multiple times, “it is different every time!”

On our way back to Nashville that evening, we decided to see if we could find concert tickets for that night. Shockingly, there weren’t any shows at the Ryman auditorium on a Tuesday, but there was a Grand Ole Opry show with Old Crow Medicine Show, Asleep at the Wheel, Brad Paisley, the Quebe Sisters, Del McCoury Band and Elizabeth Cook. While navigating me to the concrete Parthenon in Nashville, Mr Waters booked balcony tickets for the 7PM show. After a quick look at the absurd American recreation of a Greek icon, we dropped off our Jack Daniel’s loot at the hotel and drove across town in rush hour traffic to the Opry, located at the stunning location of a mall. The show was fantastic and incredibly civilized. The audience was seated pew style in the auditorium; we learned about Opry history from a video featuring Carrie Underwood; the bands played three songs each in their concise formats; and there was no chance of an encore thanks to the radio format. If you want to go see great live music, but want it to be like a movie theater that serves beer, then you should definitely do this. The bands were incredible, it must be said, and there was some room for improvisation and stagemanship, which was impressive. The format also is useful for comparison between genres of country: blue grass, pop country, singer songwriter, classic bands. You can learn a lot of nuance. The crowd was also distinctive: high school trips, families, retirees on bus tours, middle aged parents taking a holiday. One audience participant said his family had been looking forward to this for 2 and a half months. Mr Waters and I looked at each other, and said, “we’ve been looking forward to this for 2 hours.” Whoops.

After this we headed up to Lexington Kentucky, via the Maker’s Mark Distillery in Loretta, KY. In Kentucky, our focus was to be bourbon. We started with a bang at Makers, which was probably the most impressive in its branding: the entire facility was black and red, often covered in red wax. They also let us taste the mash in the mash tanks, which I found exciting. That night after arriving at our B&B we strolled down the street to a brewery where there was a local blue grass band whose CD we now own (it felt very 90s). The next day we visited Buffalo Trace, Ruth’s Candy shop in Frankfurt, Rick’s White Light Diner for crazy good Po Boys, then Woodford Reserve for the most sanitized distillery tour (replete with a 200 meter bus ride down and up a hill and personal headsets to hear the guide better) which also was the most active (we saw them drilling then emptying barrels of bourbon into coal filtration right before bottling).

At Woodford one of the staff members we were chatting too also gave us a dinner recommendation for Lexington, near another brewery we were planning to check out, and our night was sorted. We had dinner at County Club where I had a delicious Szechuan style pork belly as their special, then we crossed the street to West Sixth brewing and sat at the bar, chatting to the guys who ran the brewery for a few hours while watching the Kentucky basketball team destroy West Virginia. We went away with a growler of beer and a couple pint glasses and a sample of the hoppiest IPA I’ve ever tasted, which the staff gave us in honor of our honeymoon.

We were sad to leave Lexington the next day, but we stopped in Louisville at yet another brewery and another distillery on our way home to Chicago to add some fun. After lunch at Against the Grain brewery in Louisville Slugger stadium, we rushed over to Bulliet distillery to arrive exactly as the last tour of the day was starting. Mr Waters generously refused the samples and took the first leg of driving, and 5 hours later we were home with take away Indian food and some TV.

While American culture tends to encourage planning vacations in advance, the best thing about a road trip is the impromptu decisions and detours you are able to make. By taking another great American tradition of roadtripping, we were able to get back our unplanned and spur of the moment vacation pattern. Mr Waters added 5 states to his list of places he’d seen, we learned all about distilling spirits southern music, and we got to experience rural culture on our urban road trip.