I left the office Thursday afternoon to grab a cup of coffee. We walked outside, and it was dark, as if a storm were rolling in. My colleague said, “is it going to rain?”

No, it wasn’t rain. The air was a thick brown haze. I tried to breath less. The air quality that day got up to 201 aqi.  I am a runner, and I love to hike and swim and get out whenever I can. As a runner who works, I wake up slightly earlier to go running before work, but sometimes it is a struggle. The choice is bed or running. Bed sometimes wins, but I feel like a bad person. I should choose to run, and excuses are for chumps. But now I ask myself: how much air pollution should prevent me from going on a run? And is not running because of pollution just another cop-out?

Today answered my question. P and I went running at around 11 this morning, with the intent to get a relaxed 4 miles in. The sky was clear straight above us through the buildings, and the sun was shining. It seemed like a nice day. We started jogging, and it just felt horrible. We stopped multiple times, failing to catch our breath. After deciding to shorten the run to 3 miles, and walking through some crowded sidewalks on our way home, we discovered that the pollution in Eastern District, where we were running, was 150–completely in the red “unhealthy” for everyone zone. My lungs just ached for oxygen. 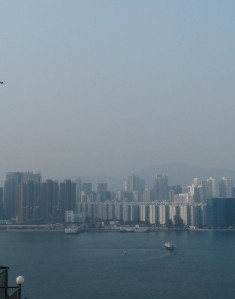 Before 9 am it was still in the orange, “unhealthy for sensitive groups”, range.

Not doing that again.

On Friday our run consisted of going straight uphill into the trails, and our lungs thanked us. It was 7 am in the woods, instead of 11 am near roads. The difference cannot be underestimated. I felt great after 6 miles. We finished before 8am, got in good mileage between walking up stairs, and had relatively fresh air.

I have learned that earlier is better. As the air heats up, and the factories and busses start running, the air gets worse. I am not running after 9 am again, even on Sundays, for a while. This means I have to actually wake up early in the mornings.

If you live in a place, like Hong Kong, with chronic pollution problems, it is healthier to exercise regularly than to not exercise at all. Your breathing will be a problem no matter what. But you should still do everything you can to avoid heavier taint. Getting off the roads, running early in the day and leaving the urban areas can make running or walking a significantly better experience.

So we can still work out, but check the air quality first. I have created a few new rules for myself: no running after 9am, no running at “unhealthy” air quality levels, and at least once a week exchange a road run for a trail. This isn’t an excuse to stay in bed in the morning, it isn’t a cop-out; it is making running better for my health. It may even make me more motivated to get out of bed earlier in the morning. Here’s to health.

One thought on “Pollution: Running and Unhealthy Choices”